With the Civita di Bagnoregio tour we will take you to the rediscovery of one of the most particular places in the upper Lazio region. Infact the city is located between the Bolsena lake and the Tiber valley, in the valley of the calanchi, an area in the municipality of Bagnoregio. Than you need to know the morphology of this area has been generated by erosion and by continuous landslides that still affect the area.

The upper layers are formed of tufaceous and lava material. The erosion is due to the work of torrents, atmospheric agents, and deforestation.

Civita was founded 2500 years ago by the Etruscans.

What can you see in the Civita di Bagnoregio Tour?

The ancient town was accessed via 5 doors, while today the door of Santa Maria or della Cava, is the main one, you can also access to Civita di Bagnoregio from Calanchi valley through a suggestive tunnel dug into the rock. There are numerous Etruscan testimonies of Civita, especially in the area called the old St Francis; where a small Etruscan necropolis was found. Infact the Etruscans made Civita a thriving city, favored by its strategic position for commerce.

From the Etruscan period the so-called “Bucaione” remains, a deep tunnel that allows access, directly from the village, to the Valle dei Calanchi. Many chamber tombs, dug at the base of the cliff of Civita.

It’s Inhabited by only 7 people in 2016 and it’s isolated, Civita can only be reached through a pedestrian bridge built in 1965. The cause of isolation is the progressive erosion of the hill and the valley, which gave life to the shapes of the gullies and continues today , risking to make disappear the fraction, also called “the dying city” or more rarely “the dying country”.

You can have lunch in a typical restaurant (surely our driver will suggest one of the best) and you can have time for a walk along the main shopping streets. Do not forget to taste local products. 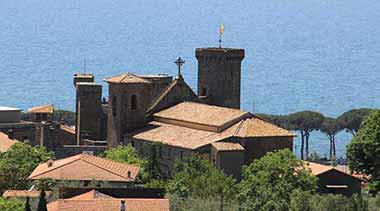 Certainly interesting the combined visit of Civita di Bagnoregio with 2 of the most beautiful villages overlooking the lake of Bolsena.

In Montefiscone, built on the mane of a volcano, it is possible to visit the Rocca dei Papi. From here, you can capture magnificent 360-degree panoramic images. Inside the ancient town there are also two important churches: the Basilica of San Flaiano and the Cathedral of Santa Margherita. The first was built so that it recalls the holy sepulcher of Jerusalem. The second one preserves the wooden Crucifix miraculously escaped the fire of 1670.

As for the second Borgo, we suggest a visit to Marta, spectacular for its medieval views dominated by the clock tower. Marta is renowned for the production of “Cannaiolo” wine and the fishing of eels that you can certainly taste together with the typical “Est, Est, Est!“ 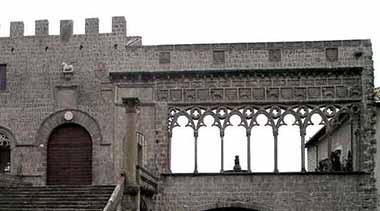 Extend your tour to Viterbo “the popes’ city”

As an alternative to Marta and Montefiascone it is possible to combine a visit to Civita di Bagnoregio to the city of the popes: Viterbo.

The historic center of Viterbo is still rich in signs with a medieval imprint. Starting from Plebiscito Square it will be possible to admire the Priori Palace of the XIII century. In the same square the clock tower, symbol of the city, will stand out towards the sky. And in front of us, however, we can appreciate the Church of S. Angel, in whose façade there is a sarcophagus. Legend has it that it preserves the body of a Bella Galliana killed by a rich man who never managed to conquer the girl’s heart.

Entering Palazzo dei Papi you will find Palazzo Farnese. Further on is the Roman Cathedral of San Lorenzo and the adjacent Palazzo dei Papi, inside which there is the Museo Di Arte Sacra.

Finally you can visit the Church of Santa Maria Nuova and the Sanctuary of Santa Rosa through the medieval district of San Pellegrino.

#2 EXTEND YOUR VISIT WITH COMBO TOUR

Departure from Rome and airoports

The convenience of skip the line tickets. To follow the list of attraction we coul book for you. 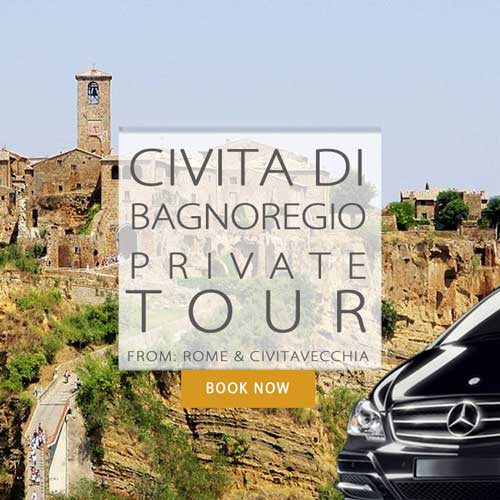