POMPEII TOUR FROM ROME OR SHORE EXCURSION FROM CIVITAVECCHIA

Choose from a variety of itineraries to discover some of the most extraordinary places in the world where time seems to have stopped to offer an authentic look into life in ancient times. With our Tour, the beauty of the ruins of Pompeii unfolds in front of your eyes to give you the magic of secrets buried for centuries under the ashes of Vesuvius.

Pompeii Tours transform your Car rental experience in a real trip back in time that takes you back to the splendour of the villas and temples of ancient Rome, statues, mosaics and frescoes that represent the best evidence of the life, customs and traditions of the time.

Choose Tour of Naples + Pompeii if you would like to start your trip with a visit to the main attractions of Naples, alternatively choose to exclusively explore the archaeological excavations with either Pompeii Tour.

With or without a tour guide, but without giving up comfort and professionalism, we also give you the possibility of booking the Pompeii Tours in shared mode which will allow you to make significant savings.

SKIP THE LINE
with luxury option

SERVICES
included and not included services

Pompeii destroyed by the eruption of the volcano Vesuvius in 79 b.C., is buried under 4 to 6 m (13 to 20 ft) of ash and pumice. It was lost for nearly 1700 years before its accidental rediscovery in 1749. Its excavation has provided an extraordinarily detailed into the life of a city to the height of the Roman Empire. A walk inside the excavations, through the perfectly preserved bath theatres, temples, markets and forums will bring you back into the lives of ancient Romans.

OPLONTIS AND THE VILLA OF POPPEA

Less known as archaeological site, compared to Pompeii, is the Poppea’s Villa. Erected in Oplontis under the slopes of Vesuvius, it still maintains the charm of the splendor of Imperial Rome.

The main monument, the only one that can be visited, is the villa of Poppea inserted among the assets that UNESCO has defined as “World Heritage”. A magnificent residential building from the mid-1st century BC, enlarged during the Imperial era, was being restored during the eruption. It is attributed to Poppaea Sabina, second wife of Emperor Nerone, but in any case falling within the patrimony of the imperial family.

If you choose the combo tour Pompei – Naples , you will arrive in Naples in 2 hours. You will see the Cathedral of San Gennaro with the liquid blood of the Saint, Palazzo Reale (royal palace), San Francesco di Paola, beautiful church located in Piazza del Plebiscito, Galleria Umberto I and the Castle of Maschio Angioino.

Also you can visit “via Spaccanapoli” where you can find local objects in a peculiar scenario. Remember to taste a Naples coffee in some bar!

Amalfi is patchwork of flat and domed roofs and vine-covered stairways tumbling down to meet the gentle curve of the beach. Amalfi is the main town of the coast on which it is located, named Costiera Amalfitana(Amalfi Coast) and  is included in the UNESCO World Heritage Sites. The Amalfy Coast is a postcard of little cities like positano and Sorrento.

In Sorrento you will enjoy superb view of the Bay of Naples. Is possible to see the Island of Capri. The smell of lemons, olive trees and bouganvilles follow you in the round trip. Indeed, Sorrento was famous in ancient time, for its wine, its fish, and its red campanian vases.

In Positano you could visit the church of Santa Maria Assunta with its dome made of majolica tiles as well as a 13th century Byzantine icon of a black Madonna. Enjoy time at leisure to explore this elegant spot with its designer boutiques, shops and seaside cafes.

As in each of our tours you can customize your itinerary of Roman’s Castles Tourat any time, making your visit special and unique. At any time you can choose to stop the itinerary to indulge in relaxation and to stop for lunch.

You can have lunch in a typical restaurant (surely our driver will suggest one of the best) and you can have time for a walk along the main shopping streets.

Finally you could book (where possible) a licensed language guide for the places you love most: we will put at your disposal only the most prepared and competent tourist guides. 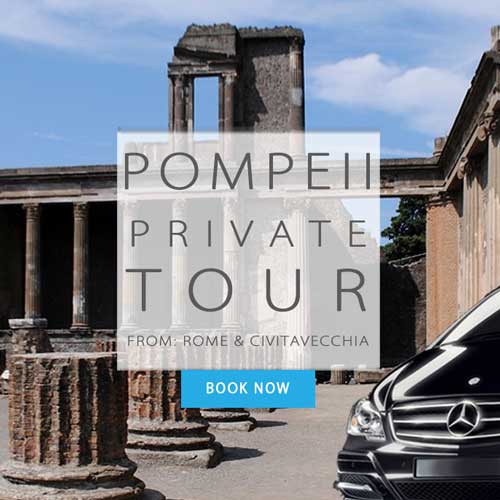 LUXURY WITH SKIP THE LINE