Let us tempt you with a day trip to the discovery of the many artistic treasures of Assisi and its mystical atmosphere. With the tour of Assisi of Taxi NCC Italy, you can immerse yourself in the history of the place, through ruins and medieval buildings along the main streets used by Saint Francis.

Enrich further this valuable experience with a visit to Orvieto, which from its cliff dominates the underlying Umbrian vineyards. Relive the ancient Etruscan past, the splendour of the era of Commons and the secrets of the underground of the Umbrian city with our car rental services.

You could extend your trip with a ride through the historic centre of Perugia, in the shadow of churches, bell towers and medieval buildings that enclose some of the artistic treasures of Western art. The Umbrian capital will provide unexpected views. 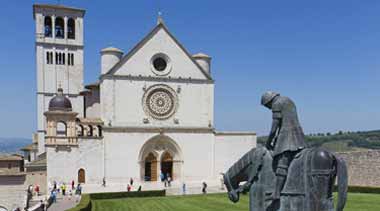 St. Francis Cathedral was constructed in the Gothic style between 1257 and 1265.

In the Inferior Basilica you can many fresces about St. Francis life and Jesus passion. The famous paints of Giotto are located in the right transept and its represent life of Jesus.

All buildings in Assisi, that is in real a small village, are built by using a local stone from Subasio mountain. You can feel when you enter in the city a sense of relax and peace.

Assisi’s oldest nucleus, is protected by a defensive apparatus with a long belt of town walls and eight fortified entrance portals, which are still perfectly preserved. The wall topped by two castles on peak of the mountain: the Major Castle and the Minor Castle.

Santa Chiara Cathedral is a little older and decorated with an elegant middle portal with three rose-windows. The Cathedral, dedicated to the Patron Saint St. Rufino, vaunts a splendid and unaltered facade with sculptures and reliefs.

On the Town Square, you will find the Priors’ Palace (1337), the Palace of the People’s Captain (12thcentury) and the Temple of Minerva, built during the augustean period with intact pronaos, columms and corinthian capitals.

Nearby, you can find places which are connected with the life of St. Francis: Eremitage of the Prisons, immersed in a wood of oaks and ilex; convent of St. Damian, which was built up around the oratory were, according to tradition, the Cross spoke to the Saint.

In the plain, the Basilica of Saint Mary of the Angels was built by Alessi between 1569 and 1679 to protect the Porziuncola Chapel, which was the first meeting-place of the Francescan brotherhood. 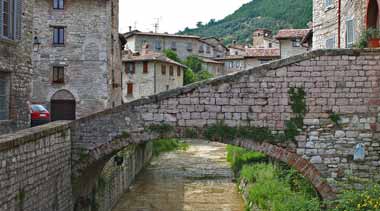 ST. FRANCIS TOUR: ASSISI AND GUBBIO IN ONE DAY

Gubbio was a Roman center as is demonstrated by the Eugubine Tablets (3rd – 1st century B.C.), the most remarkable epigraphic heirloom of pre-Roman Italy. They consist of seven bronze tablets which offer ritual directions for particular ceremonies, and also give indications as to the organization of the Eugubine city-state.

Gubbio was an ally of Rome as far back as the 3rd century B.C. As a municipality under the authority of the Crustumina tribe, the town flourished in the early centuries of the Empire, as one can still see today from the many archaelogical remains, among which those of the Roman Theatre.

In 1350, when Giovanni Gabrielli became lord of the city, development came to a halt.

Cardinal Albornoz, in 1354,  defeated the tyrant, Gubbio came under the dominion of the church, but with relative autonomy.

In 1376 the town rebelled against this state of affairs; soon afterwards Bishop Gabriele Gabrielli took power.

There ensued a period of internal fighting which ended with the subjection of Gubbio to the Montefeltro family (1384).

The domination of the Counts and Dukes of Urbino (Montefeltro until 1508, Della Rovere until 1631) gave rise to a period of relative civic prosperity when the arts flourished, especially under the dominion of Guidantonio and Federico di Montefeltro.

Federico began the construction in Renaissance style of the Ducal Palace. The people of Gubbio remained faithful to the lords of Urbino even during the brief hegemony of Valentino in 1502 and of Lorenzo dei Medici in 1516-1519.

What we will see in Gubbio?

In Gubbio you can visit Palace of the Consuls, the Cathedral, Ducal Palace or New Court or Square of the Forty Martyrs, St. Francis Convent,  Church of San Domenico and the Bargello Palace

12hours tour in Assisi with driver

the convenience of skip the line tickets