Perugia Tour from Rome or Shore Excursion to Perugia from Civitavecchia

Perugia tour is ideal if you would like to spend a relaxing day in Perugia: along the streets of the old town you will find glimpses of unexpected beauty and the works of some of the greatest artists in history, jealously guarded by the impressive medieval architecture.

After visiting the Cathedral and the Palazzo dei Priori, you can also round off this amazing journey with a lunch break in the beautiful surroundings of Assisi and mystical atmosphere of the Church of San Francesco.

Select the Perugia tour if you are looking for a professional and comfortable car rental service in the heart of the art and the history of Umbria.

Perugia, the great “Guelf strong-hold” rises up in the Umbria region’s heart, with its 5 storical quarters closed-in by its Etruscan town walls. These bastions were constructed 22 centuries ago and were formed by cyclopic square masses are still visible for long stretches.

When the city of Rome was little more that an encampment, one could already enter the etruscan Perugia Italy using one of seven portals, among which one was particularly mighty, the Porta Pulchra or of Augustus, dating back to Etruscan times.

The tour in Perugia

Entering the city via Porta San Pietro, you’ll arrive at the basilica of St. Dominic on the right-hand side; the very important National Archeological Museum of Umbria. Continuing along, you’ll reach the Sopramuro Square, where the 15th century Palace of the Old University and the adjacent Palace of the People’s Captain look down on the square.

Further on you’ll find yourself in one of most important squares, where you’ll see the Priors’ Palace, the Cathedral and the 13th century Major Fountain at the center. These monuments render the Piazza Grande of Perugia a superb architectural complex. At the extreme end of Corso Vannucci you’ll find famous panoramic gardens built on the foundations of the Rocca Paolina. These foundations contain  an entire quarter of the old Perugia: a dead city, a sort of Medieval Pompei which has been brought tot light again and which is fascinating to visit.

Perugia’s ascents and stairways are usually quite steep. The way Via delle Prome is a typical example. Leaving from the Augustus Arc, this way lead to the upper point of Perugia, where used to be the castle of Porta Sole, erected in the XIV century by the dal Gattapone, and destroyed later.

You should not miss the archtectural complex of St. Francesco, with the Oratory of St. Bernardino, a masterpiece of Agostino di Duccio, who, in covering the facade with bas-reliefs of enchanting grace and modelled fineness made it a little poem of Renaissance sculpture.

The most important manifestations is the musical festival Umbria Jazz and the gastronomic festival Eurochocolate. Especially for children, you need to visit Città della Domenica, first amusement park of Italy

PERUGIA AND ASSISI IN ONE DAY

Dear Guest if you want to feel the life of St. Francis, patron of Italy, you will be happy to choose the combo option Perugia and Assisi. You will see the main Basilica of Saint Francis divider in lower and superior Basilica.

Inside you can admire paints about Saint Francis and Jesus life. Of course you will appreciate  the Giotto’s frescoes

PERUGIA AND GUBBIO IN ONE DAY

As an alternative to Assisi, it is possible to visit Gubbio . Splendid Umbrian town.In Gubbio you could visit Palace of the Consuls,the  Cathedral, Ducal Palace or New Court or Square of the Forty Martyrs, St. Francis Convent,  Church of San Domenico and the Bargello Palace.You can have lunch in a typical restaurant (surely our driver will suggest one of the best) and you can have time for a walk along the main shopping streets. Do not forget to taste local products. 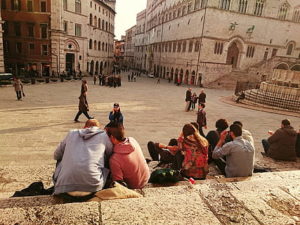 the convenience of skip the line tickets

You can ask skip the line tickets for following attractions.